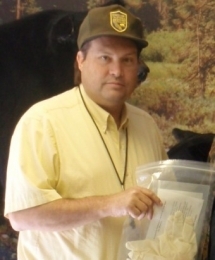 Institution
Department of Fish and Game

Growing up in rural Wisconsin, Dr. Andrew Gordus found a passion for fish and game early in life. When he was fourteen years old his family moved to southern California. After graduating from high school, he met with a counselor from Ventura Jr. College to develop a curriculum and career path. Upon learning that Humboldt State University offered a major in wildlife management, and having a great interest in wildlife he decided at the moment that was the career of his choosing. CPS student staffer Alyson A. Barnes spoke with Dr. Gordus recently about his career path and research.

You are originally from Wisconsin, how did you end up at the California Department of Fish and Game (DFG)?
After I graduated from Humboldt State with my Bachelor’s, I worked for the US Fish and Wildlife Service as a Wildlife Biologist in the National Wildlife Refuge system.  It was during that time I decided to pursue my MS degree and was accepted to the Humboldt State graduate program, where I completed an avian cholera/lead poisoning study in snow geese at Delevan National Wildlife Refuge.   During my Humboldt years, I decided to continue my education and was accepted in to the Comparative Pathology graduate group at UC Davis.  After graduating from the University of California, Davis, I worked for seven years at H.T. Harvey and Associates, an ecological consulting firm in Fresno, California. Working there I was closely involved with DFG and other agencies dealing with the selenium contaminated agricultural evaporation basins in the southern San Joaquin Valley.  Historically DFG would hire at an entry level, but back in 1999-2000 they started offering positions in the mid level, so I applied. During my private consulting years, Fish and Game staff had an opportunity to get to know me and review my work and eventually Dale Mitchell, the supervisor for environmental review, hired me.

What about the recent RFP led you to apply for funding?
Well, a few things. A few years ago, Dr. Rob Atwill and I met with Jay Chamberlin, who was the assistant to Secretary for Natural Resources Mike Chrisman, and we had a long discussion about the food safety and wildlife issue. Dr. Atwill mentioned that the new Center for Produce Safety was coming to campus soon, and we agreed we would seek funding to continue the wildlife study. Secondly, the DFG Regional Manager assigned me to address food safety issues related to fish and wildlife and try to resolve any conflicts.   Because very little to no funding was available from the department, I pursued funding to cover field crew salaries, purchase supplies, travel and analytical laboratory costs.

What do you feel your project will accomplish in regards to the industry?
When the industry came out with the Leafy Green Marketing Agreement metrics, auditors and buyers were discouraging wildlife use and wildlife habitat on the farms.  DFG said, "Wait a minute, this is not appropriate;" but at the same time we did not have the science to support whether wildlife was truly a carrier/vector for these pathogens. Rather than being reactive, we decided to be proactive, go out and complete a survey type research project-- with as many locations as we could across a three county area to determine if wildlife truly is an issue of concern.

What would you say a day’s work consists of? How do you spend your time outside of work?
My field days are long gone.  I’m in the office, in front of the computer all day. I have two scientific aides out doing the field work. I do the training and networking for properties and make sure they have the equipment that they need. Outside of work, I like to hunt and fish.

Lastly, what would you consider a career highlight?
I’ve had a few over the years. I was the first to publish the isolation of Borrelia burgdorferi (Lyme disease or borreliosis) from a wild animal in California.  I developed the mitigation wetland designs and management plans for water birds in relation to the selenium contaminated agricultural evaporation basins in the San Joaquin Valley. Lastly, I was the first to document wintering impacts of agricultural evaporation basins.  These basins are also hypersaline and we had some ruddy ducks die one winter from salt toxicosis (poisoning) and salt incrustation on their feathers.