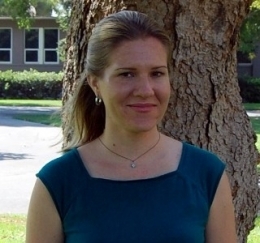 Dr. Coaker grew up in a science-friendly family who influenced her field of study. She took her appreciation of plant science with her to Dr. David Francis' laboratory at The Ohio State University, where she learned how to conduct applied field and basic lab-based research. CPS student staffer Alyson A. Barnes met with Dr. Coaker recently about her career path and research.

First off, where are you originally from? Did it influence your career path?
I am originally from Phoenix, Arizona. Both my parents were scientists (both are now retired). My mother was a biology teacher and my father was a chemistry professor, so I think their love of science and scientific inquiry rubbed off on me.  I spent a lot of my time in the mountains and the wilderness in Arizona and I really think that is where my first interest in plants arose, by being in close proximity with nature.

How did you learn about the Center for Produce Safety?
I first learned about CPS from two colleagues, Trevor Suslow and Mike Davis, shortly after I arrived at UC Davis. They encouraged me to look more closely at the RFP.

What was it about the recent RFP that led you to apply?
I applied for funding because one of my primary research interests is studying the interactions between bacteria and plants. Because recent events  had heightened awareness of food safety issues, I decided to expand my research program to include food safety. I thought CPS would be an ideal place to seek funding, and I was excited about the ties they had, not only with academia but with industry.

CPS funded your project "A high-throughput, culture-independent approach to identify index and indicator species for E.coli O157:H7 contamination."  Can you tell me a bit about the project?
There are several researchers involved in the project. I am PI on the project, but I collaborate with Trevor Suslow, who is collecting all the field sampling, and Johan Leveau, an assistant professor in plant pathology who is working with me to assess microbial diversity. We are testing the hypothesis that the microbial community of the leaf can influence the ability of E. coli O157:H7 to survive and persist in the field. First, we are investigating what bacterial communities are associated with lettuce leaves in different growing regions in both California and Arizona. We are looking across different growing seasons: in the spring, early summer, and late summer. Our theory is, if we have a better understanding of the microbial populations on lettuce leaves, we might have a better understanding of the seasonality in outbreaks. One question we are addressing is, are there any microbes associated with the ability of E.coli to persist on leaves? We are sampling romaine lettuce leaves in grower sites along the California Central Coast, Imperial Valley, and Yuma, Arizona, using a high- throughput DNA sequencing approach to directly analyze both culturable and unculturable organisms on leaves.

What does the industry stand to gain from your project?
I think the industry will have a better understanding of how different microbes on leaves can influence the persistence of E.coli. The longer-term goals of the project are to be able to highlight particluar bacteria species—specifically, those that have promise for both index and indictor organisms for early warning systems for E.coli detection. I think another deliverable from the project could be the ability to identify particular bacterial species or populations that could positively or negatively influence E.coli survival.  In terms of a negative influence, those might be applicable to biocontrol.

Food safety has been a hot topic lately; where do you see it five years from now?
I think there are going to be more automated, standardized early warning detection systems for microbial pathogens of importance to food safety. I also think there is going to be more synergy and communication between academic food researchers and the food industry. In order to improve food safety, I think organizations like CPS are really providing an important link between academic researchers and industry.

How do you spend your time, aside from working on your research project?
I’d say the majority of my time is spent on research-related activities, including time in the lab mentoring the people who work for me, and writing research proposals to fund what we do in the lab. We have six people in the lab—three postdoctoral scientists, two graduate students, and an undergraduate. About 30% of my time is spent teaching. I teach two classes a year: a graduate-level class in plant microbe interactions and an undergraduate biology course. Outside of the lab and teaching, I spend most of my time with my husband and four-year-old son. I also like to spend a lot of time outdoors; I really enjoy tennis, hiking and skiing.

Lastly, when you look over your career to date, what accomplishments have been most meaningful to you?
Being offered a faculty position at UC Davis, accepting that faculty position and starting here. It’s really great to be at a university where there is a core of agricultural scientific researchers, and a core of expertise. Davis is really strong in plant research and agricultural research, so that is definitely a highlight. I think another highlight would be receiving a major federal research grant to support the research in my lab.